Billy, formerly Smokey Joe is dark like his name impiesbut still sporting a great teared face, ocilla and clear spot pattern. .He is an absolute sweetheart being as cuddly as a kitten gets. He is going home to Kristie and Randy in CA. 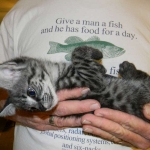 But still a cuddle bunny! Billy, F-1 Savannah Male, will steal your heart. He is the cuddliest guy you ever met! He will make a superior family member for Kristie and Randy in CA 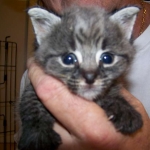 How can anyone resist this face. Billy, formerly Smokey Joe is a very dark boy but still has excellent facial markings, ocilla and tears. He is going home to Kristie and Randy in CA Billy is amost ready to go home to Kristie and Randy. My granddaughter Madison and son Bart will miss playing with him. 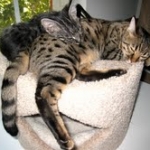 Billy and Drella have become the best play buddies ever and sweet Edie finally has a sleeping pal. I've enclosed a picture I took this morning so you can see the look of bliss on Edie's face to finally have a cat who will make kitten-piles with her. Applause to Betsy and her human imprinting program! We'd heard that F1s can be difficult and somewhat stand-offish, but not this little sweetheart. Billy plays like a fiend and then seeks one of us out for a cuddle before going off again for fun. 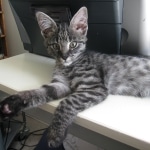 Oh my. Billy is everything we ever hoped for in an F1 and more. He's beautiful--he has ridiculously long legs, dark black round spots, HUGE ears with clear ocelli, and the most precious face I've ever seen on a kitten. At 13 weeks old he's almost as tall as our pocket Savannah, Edie! Oh my gosh, we are thrilled! Billy is 100% integrated into our family, already. Randy and I just were saying that if we ever want another Savannah, your human imprinted F1s are the only ones for us. Billy and his new Savannah Family 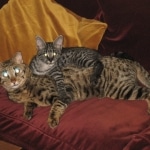 Billy is doing great! Everyone has fallen in love with him, head-over-heels. Randy and I are clearly besotted, Drella loved him from the first moment, and Edie got over her hissy fits in short order and is now a proud big sister. Here is a picture I took this morning of Billy and Drella: This morning, as I was making my bed, I found one of Billy's favorite toys tucked into the covers where Randy sleeps: When I looked more closely, I was shocked to find one of Drella's uneaten mice! Billy thinks they're toys... and he loves bringing his toys on the bed to toss around and play with while we sleep. EWWWWW!

Billy is the most well-adjusted kitten I've ever encountered. From the first moment, he fit right in to every aspect of our household. He sleeps on the bed with us all night, eats heartily, hasn't had a mistake with the litter box, gets along perfectly with Drella and Edie, and is the sweetest, most affectionate purr-ball ever. Billy plays for hours with his new friends but seeks his human pals at sleeping time. During the nap hours of the day, Billy can be found sleeping on Randy's desk or mine. He wakes up periodically to give us head-butts and face-licks. If one of us leaves our office, our little gray shadow is soon to follow. 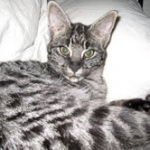 Billy just gets more amazing every day! At four-and-a-half months of age, he's taller and longer than Edie. He's the sweetest cat I've ever known. We love it that he sleeps with us in bed every single night (even if sometimes there are surprises left for us in the morning!) Drella, our F2, is one of the smarter cats I've known, but Billy, an F1, is clearly smarter. He figures something out after just seeing it happen one time. Today, something really freaky happened that I'm convinced was not a coincidence. Billy was hanging out on the floor in our loft while Randy and I talked. I said something about Billy acting squirrelly and Billy immediately took off down the stairs, returning in about 20 seconds with his stuffed squirrel, which he dropped at Randy's feet. OMG. Are they really that smart? Billy continues to grow bigger every day. He's six months old now and about nine pounds. He's a stunningly beautiful cat with such dramatic markings! We love his big round black spots and his kissable black nose. Billy is manifesting more Serval qualities as he comes into his adolescence. He'll jump up to any height in our home, even onto places where our F2 fears to go. The only sound we've heard him make besides loud purring is a bird-like chirp. Billy is starting to assert himself with with our other Savannahs. When they're play-fighting, Billy even does the snake head maneuver! He's by far the most affectionate and people-oriented of our cats, sharing his cuddle time evenly between Randy and me. Recently, Randy taught Billy to play fetch with a small tennis ball. It took about two minutes for Billy to learn. Now, many times a day, our little puppy-cat comes trotting up with a ball in his mouth, ready to play. He's an amazing cat in every way! Here's another picture I took today. You can see that Billy's face is starting to look a little more mature. He continues to become even more striking as he's maturing. Billy has been coming into his own as a water kitty. Last night he decided to take the big dive into a sink-full of water. He ended up soaked. He realy isn't mad about getting wet, it was when we turned the water off that upset him! Billy has the most interesting expressions! Billy continues to grow and thrive. He's getting very big as he moves into his adolescence. He's testing his dominance with Drella in rowdy play fights and has figured out how to jump on top of every high place in our home. Billy makes the most spectacular leaps--he can easily jump 7-8 feet straight up from a sitting position and lofts himself across 12 feet from a high cat tree onto our bed (frequently with us in it, trying to sleep!) His attachment to his humans is intense. He's affectionate with us throughout the day and night and sleeps right between us with his head on a pillow. He loves to be cuddled, relaxed as a wet noodle, while laying on his back in our arms. Every visitor to our home comments on his dramatic coloring, his huge ears and serval-looking face. Here is a picture I took yesterday where you can see how much Billy has grown by comparing him to Drella, who is almost 20 lbs. Billy and Drella have become just the best of friends! Billy is doing great! He's just the sweetest, most affectionate cat ever. He's become our star jumper--he can go from a sitting position to an incredible seven foot vertical leap! We've measured his horizontal leaps at twenty feet. Amazing! Billy has the most expressive face, Kristie calls this one Who Farted We've had some big bugs in our house this summer but thanks to Billy, they don't get far. He loves to carry them around in his mouth and then drop them right on Randy's foot while they're still wiggling.