This precious boy out of Sparkle and Merit will be going to live with Sharon in Kentucky. This little guy has some great spots! 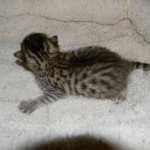 Loaded with spots this little guy will make a super companion. This precious face is going to live with Sharon in Kentucky. 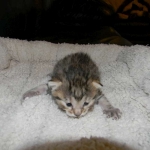 Just opening his eyes, Horus, Egyptian Mau will be a beautiful boy. 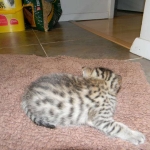 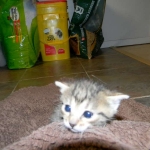 It's a beautiful day in the Neighborhood with these beautiful faces like Horus'. Full of energy Horus, Bronze Egyptian Mau male will be a bundle of mischief for Sharon. 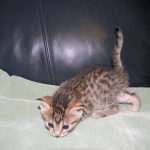 Why are you following me around with that camera? Horus, bronze Egyptian Mau just wants to run and play. 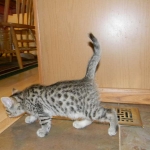 Horus will be going home with Sharon very soon now. He has just the sweetest disposition and is beautiful to boot!

Horus and his Mom are say goodbye here at the farm. They start their life together today.

Just wanted to give you an update on Horus. He is doing very well. He has adjusted very quickly to the house and to my other pet a 14 year old Yorkie. They are now playing, running after each other and licking each other on the face. The 1st day or 2 was a little iffy but they are doing great now. I had my grandson's 15th birthday luncheon on Sunday and was a little concerned about Horus and how he would react to so many different people in the house. We had all the way from a 1 year old to a 76 year old and he did great. He didn't scratch or bite anyone. He played with all the grandkids very well and even went up to the 1 year old to let her pet him. She was very easy so that made it smoother. He has such a soft touch. Several people asked me if he had been declawed because he was so easy with them. No nails out at all. But when it was all finally over both Horus and Nefi (the Yorkie) and me curled up on the couch and went into a coma for about 2 hours. We were all wore completely out. He loves all his toys and especially his big climbing tree. He's going to the vet on Saturday for his next set of shots. I send you some pictures soon.

Another picture of Horus on his good side.Taken with my daughters phone so the pictures aren't great but you get the idea of his cut. He is doing great. He is leaving his staples along so I let him sleep without his cone on last night. We go back on Saturday to have the staples removed. 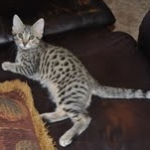 Here's a few pictures of my beautiful boy taken over the weekend. He is so pretty!! He is doing very well after his staples were removed. The staff at the hospital have fell in love with him. He is so sweet to everyone he comes in contact with. He will go back in 4 weeks to have the pin removed and get fixed at the same time. 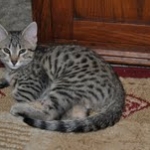 He is such a lover. When he is not playing with my little Yorkie, which he loves, he loves to play with all his toys. He is so alert and attentive to everything that is going on all the time. He is a big snuggler which is wonderful for me since I'm the one he wants to snuggle with the most. You were right he is very special.

He is really growing now, a little over 14 lbs.He has quite the personality and is incredibly curious about everything that is going on. We had our plumber and furnace guys in this past week to do service work before winter sets in and they both said he was in the middle of everything they were doing. He even climbed into the plumbers tool box and was pulling out stuff and dragging it across the floor. I've also taught him to fetch. I can throw his toy almost anywhere and he goes and gets it and brings it back to me. He lays it down beside me, I can't get him to put it in my hand yet. He will only do it for me which aggravates my husband to no end. He is the most mischievous cat I’ve ever had, he is constantly looking, sticking his nose in, touching, whatever it takes to get his self into the middle of whatever is going on. And he only wants to do what he knows he is not supposed to do. As soon as I sit down at the table for dinner he jumps up in my husband’s chair and lays down so that Terry has to run him off. As soon as I get in on my side of the bed he jumps up onto Terry’s side of the bed and lays down. Of course Terry thinks Horus has some kind of master plan to push him out (which could be true) but it is a constant battle between the two of them. I think it is funny. 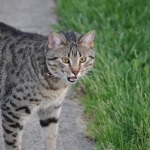 I think I belong to Horus not that he belongs to me. Also, he is a talker, constantly trying to communicate what he wants and he still purrs non-stop. I do love him so very much!! He is quite the handsome boy….big and beautiful. He has healed well from his last surgery and is quite the handful. He loves to be outside but he can’t be trusted to not stray very far so he only gets to go out when I can stay close at hand.

Horrus is keeping warm in Kentucky 2-15 Well Horus is 4 years old today so Happy Birthday Horus!!! Here is a picture of him from a couple of days ago helping me with my work at my home office. He still has the sweetest disposition and is always eager to play, fetch and go outside whenever he can. My oldest grandson simply loves him and my husband has completely spoiled him. They head butt each other every day, some kind of ritual, not sure what is going on there. I quilt a lot but now my ironing board has become Horus’s large lay down space. He has also taken over the large dog bed since we no longer have any dogs. He is still quite the character. 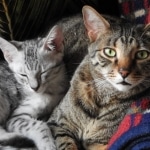 So sorry for taking so long to send this photo....but I've been waiting for a decent one of both Horus and Sudi together.