Kovu a precious F-2 savannah male will be going to live with Becki and Tycen and their children in Virginia. A 100% human imprint, Kovu will be a perfect addition to the home which already has a young F-2 savannah female and 2 Chihuahuas. 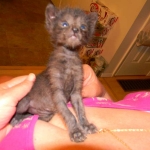 Kovu, F-2B Savannah male is growing so fast he is surprising even me. At just 16 days old he sits up, walks well is aware of things around him and seeks out play opportunities. He's a genius plus he already weighs 12 ounces. 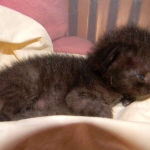 This precious little baby is from Pearl and Truffles. Too cuddly!!! 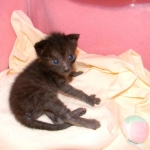 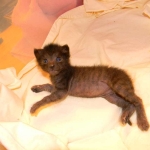 Just a little guy now, Kovu, F-2 B savannah has huge feet and is growing before my eyes. 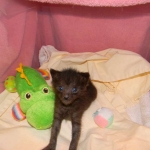 It is amazing how fast this kitten is growing. He is sitting up at less than 2 weeks. 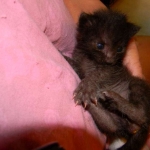 Still too precious for words, Kovu, loves to be held and played with, And boy can he purrr... 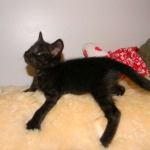 Tall and active well beyond his age this F-2 male kitten is super smart and incredibly agile. This long lean F-2 savannah guy is the fastest growing kitten I have ever had. 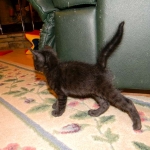 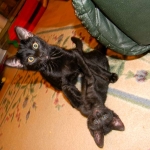 Shown here at just 6 weeks old Kovu can hold his own playing with Lizzy an F-4 girl age 15 weeks going to Rise at Sadies. 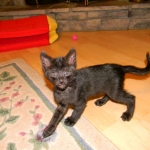 Kovu had his vet visit yesterday. The little bottomless pit now weighs 5lbs 8oz. We weren't able to schedule his neutering as his testicles still haven't dropped, but he goes back October 9 for his rabies. He is running Nyah ragged, but she lets him know when she has had enough. They are a constant source of entertainment! Attached is a picture of them playing on one of the smaller cat trees where you will recognize the pose right before an explosion! 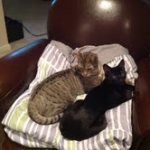 I can't believe how much he has grown! He is still a goofball, he keeps us laughing and on our toes. I hope you had a wonderful holiday! Kovu continues to grow as you can see by the picture. As you suspected, he has surpassed Nyah in height already! He has yet to grow into those feet of his so he is now just a bigger bull in a china shop. He is such a character, he does something everyday that I could email you about for a laugh. He loves all of us but still feels like our 15 year old is his special person. She shows him off to her friends who don't believe she can call her cat from anywhere in the house and he will come like a dog. He does, of course, each and every time. The best is if she is in the basement and he is on the top floor; he will go flying down 2 sets of stairs with a poofy tail and then jump up in her arms when he gets to her with that super loud purr of his! He is the coolest thing and I am so grateful to you guys for him! You can see he is still super cuddly! Here is a picture of our goofball Kovu. Hasn't he grown? He is still all legs! I just love him. He is still very much a kitten, in everything and bouncing around at all times. He and Nyah are more fun to watch than any tv show as they "stalk" each other around corners and then stampede through the house together.