Otis is a BIg boy, the largest of his litter. He has a very pleasant laid-back personality, sure to make him a special love for his forever family Otis, F-1 savannah male has a great teared face, ocilla and huge spots. Shown here at 4.5 weeks he will soon be ready for his forever home with Pat and Suzanne in NC. Otis, F-1 savannah male is the largest of his litter and like many big boys he has a very laid back disposition. The purrrrfect pet will be going to live with Pat and Suzanne in NC. Too cute for words, Otis, F-1 Savannah Male has just gotten the word that he will be going home with Pat and Suzanne in NC!

Its been a lot of fun already he IS a challenge but I really believe he is going to be an extraordinary cat!

I took him out on a leash today and he did great!

Otis has made the transition to our family seamlessly . He rode all the way home no whining just sitting looking out the window.

Otis is doing great! I took him out to a coffee shop that is kind of my second home. He made a very big impression and a young lady saw him and identified him as a savannah and she was very excited.

He also pretty much took over the vet's office on monday we were there an extra hour so everyone in the office could meet him. Dr Spindel examined Otis and said he was the best example of a f1 savannah he has seen- in any case Otis is doing well and very happy.

Otis is doing GREAT! He is growing long fast he has been a very good addition to our family - not only is he funny and smart, but he gets along well with our dog.

Otis has settled in nicely with Pat and Suzanne Otis, F-1 Savannah Male, at home with Pat and Suzanne in Winston-Salem. He appears to have taken over. Otis and his new friend Tesla, an Australian Shepard puppy. They are still deciding who's in charge although it looks like Otis may be winning! 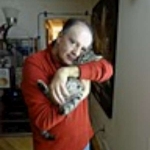 Otis is his daddy Pat's baby. That's the way it should be for all our very special F-1s! 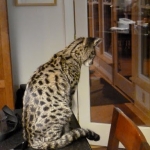 His never ending need to spread chaos and destruction brings a tear to our eye everyday. 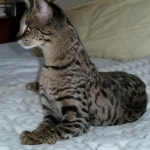 We really love the little Nimrod - he weighs 11lbs now. He and our australian shepard Tesla love each other and spend countless hours playing what I call 'grab ass'. 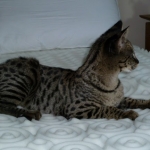 Whatever tires them out I am in favor of! All the best Pat and Suzanne Thought you might also like to see this photo that I took about a month ago of Otis. He is pretty darned special to us. We have lived with Otis for 4 years. There is certainly nothing dangerous about Otis' behavior, and he has bonded with Pat, our dog Tesla, our Ocicat Gracie and me. He is certainly precocious (!), but he can also be very loving. Thought you might like to see a picture of Otis with his "cougar", Gracie. Even though she is 8 years older than Otis, they have become quite a pair! 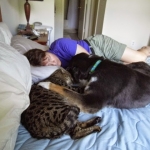