Toby is Mister personality. He is bold and outgoing. He is as close to silver as you can get in F-1 generation, with clear spots, great ocilla on his currently floppy ears, short thick tail and a wonderfully expressive face. Sure to make a wonderful new family member for Howard and Cheryl in Tennessee. 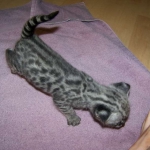 Toby formerly Six is as near to silver as an F-1 kitten gets. He has huge ears, great spots and ocilla, a beautifully teared face, short thick tail and a huge personality. There will never be a dull moment in Howard and Cheryll's lives with Toby in TN. 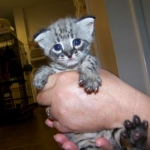 This the face of Mischief! Toby, F-1 savannah male is full of himself and would like to fill your life as well. His has gone to live with Howard and Cheryl in Tenn.

Almost as Silver as an Egyptian Mau, Toby is as silver as an F-1 savannah gets. He has gone to live with Howard and Cheryl and we look forward to more pictures as he grows and matures. 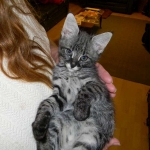 Toby has always been a real ham. He has gone to like with Howard and Cheryll in TN 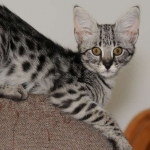 Toby has adjusted perfectly, he's such an entertaining little guy, there hasn't been a day gone by that he hasn't given us belly laughs. 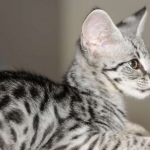 I know we've said it before but you did a beautiful job preparing him for his life with us. 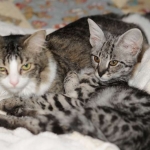 He gets along with everyone just fine but has found a special friend in our little girl Georgia. 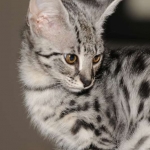 They play non stop, groom each other, and look for trouble together. We are truly enjoying our life with this little guy. 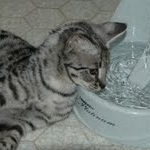 He's also decided playing in the water dish is great fun, whether it's tring to dunk his balls or just sticking his head under the fountain. 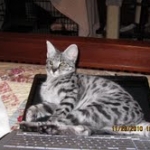 We think Toby is fabulous. Not just beautiful to look at but a pleasure to be around, except at 3AM when he starts pulling my hair to wake me up so I'll throw the ball for him LOL. 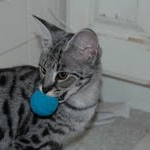 Howard and I usally wake up with a few balls under our pillows, ones that we've confiscated in the middle of the night so we can sleep. Toby is growing so fast and continues to amaze us. He is one of the most affectionate kitties we have ever owned. Toby, F-1 Savannah Male says Hello but his sister Bella, F-1 Safari female is impossible to shoot since she is a Jumping Bean